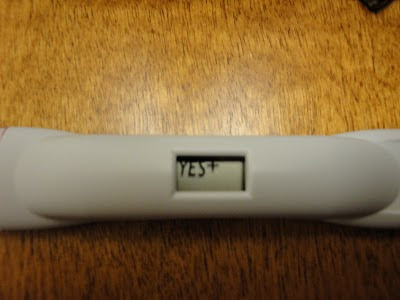 The movers got ahead of schedule in their packing and loading on Tuesday. Because of that, they were able to deliver our belongings and furniture a day early - which meant that we were able to officially move into our house yesterday! :)

I knew that I wanted to take a HPT when Aaron was around and so I had planned to test Friday morning before my beta. However, when we moved into our house a day early, we decided to test on Thursday morning. We became so impatient that I convinced Aaron to let us test last night. We both stood there while the 3-minute clock (it felt more like 3 hours) took its precious time calculating my results. I became so nervous that I said to Aaron, "Let's go out of the room and come back in the room in a few minutes." Aaron said, "No, I want to watch it." But, I left the room and shouted from the other room, "It's taking too long - it's going to be negative because if it was positive, it would have known by now." (After all of my trust in God answering with a "YES!", I'm ashamed to say that I let fear take over my heart the minute I opened the test...) Midway thru my sentence, Aaron shouted "It says "YES!" - I ran and looked at that test and couldn't believe my eyes! (It was kind of backwards...usually a wife takes a HPT and tells her husband she's pregnant, but I was too nervous to look so my husband knew before I did - haha). Since I had 2 HPTs in my box, I took another one at 4:00am and it also said "YES!" It's still so early, but we couldn't help but tell our family, who of course are thrilled! PRAYING FOR STRONG BETA NUMBERS TOMORROW! :)

Thank you, Jesus! We are so thankful for this blessing(s?)!
Posted by Aaron and Jennifer at 5:23 PM

THIS MADE MY DAY!!! God is so good! Congrats to you you both! I couldn't be more excited for you. I am praying along with you for a wonderful beta tomorrow. I have been counting down the days until you were going to test. Wow, I am just SO happy for you both!! :)

I'm so so happy for you guys! Praying for big numbers tomorrow!

EEEEKKKK!!!!! I AM SOOOOOOOOOOOO EXCITED for you guys!!! I have chills! I cannot wait for that phone call! They will call you tomorrow after the blood draw right?? STAT!

PRAISE GOD!!!!! oh my gosh I am so so so happy for you and praying of course for awesome Beta numbers!!!

I have goose bumps!! I'm so happy and excited for you! Ok- I'm going to admit this on your blog (Britney and Tracey already know) I took an hpt Sunday morning and Monday morning, too. I acted the same way you did. I ran out of the room, buried my head in my pillow, with nerves racing throughout my body- too scared to look. Byron was the one who told me ours was positive too. Very funny!!! Can't wait to hear your numbers tomorrow!

Congratulations -- SO happy for you!! God is amazingly good, isn't He?

I have tears of joy for you rolling down my face. Can't wait to hear the confirmation tomorrow! Praise the Lord for this gift he has bestowed upon you!

WOW!!! This is amazing and wonderful news! Congratulations!
http://funnylittlepollywogs.com

Jennifer,
I too have tears for you right now! I am thrilled for you both! What a wonderful wonderful moment for you two. May the blessings keep coming! My prayers will stay with you!!!

Excellent news! Can't wait to hear what your BETA is tomorrow. Praising GOD with you tonight :)

WHOOO!!!!!! I knew you couldn't wait! I have been praying for you ALL day, and I said to myself, let me go check out her blog, just to see if she waited or not. Lol. PRAISE THE LORD!!!!

Congrats!!! Praying for a healthy and happy 9 months!

That is so exciting!!

Awesome news!!! So happy for you!

Completely thrilled for you! What a blessing. Rejoice in this good news and I just know your beta will be great...those digital tests require more HCG than the line tests....so that is usually a good indication things are going in the right direction.
Congratulations.

Rejoicing with you!! CONGRATS!!!!