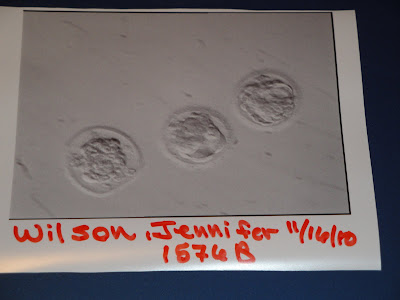 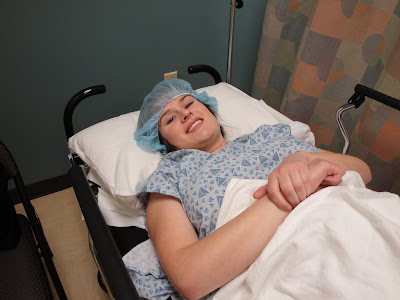 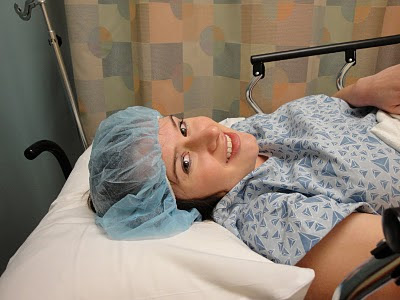 Let me first off apologize for taking so long to update! Since Aaron and I don't have but about 10-15 tv channels, I decided to stay with my MIL so that I would be able to watch tv and distract myself during the 2ww. Aaron will be coming tomorrow and I will go home with him after Thanksgiving dinner on Thursday. My MIL's computer was broken and she just got it back from a computer repairman. So, here is my update from the past week...

As I was getting dressed on Tuesday morning, one of the NEDC nurses called and told me to be sure that I had a full bladder when I arrived. I thought that was odd, because they have never called me the morning of a transfer before and this being my third time, I definitely knew the routine. (I found out after I had arrived though, that almost none of their girls had been arriving with full bladders this cycle.) However, I should have started drinking about 30 minutes earlier than I did to give the water time to reach my bladder. By the time we arrived at the NEDC, I wasn't "miserable" yet, so I continued to drink. I drank so fast that I caused myself to vomit twice (sorry if that is TMI) all over my hospital gown and bed prior to the transfer. The nurse had to give me a new gown to change into. And then I began having the hiccups... By the time, I went into the transfer room, I had drunk between seven to eight 16.9 oz water bottles - And Dr. K said that my bladder was only borderline full enough!!! Wow. But, thankfully, he did not have to use a catheter to fill me up. After all of that drama, he transferred 3 blastocysts into my womb. They were graded a 3CC, 4AB, and 4AA (4 were thawed, but one didn't survive and went to Heaven). So, now we just trust God, pray, and wait for the beta.

As anyone knows who has just had an embryo transfer and is during the 2ww, all you can think about is "did they implant or not?!" So, as I prepared to heat up a frozen pizza in my MIL's oven on Thursday, I was not thinking clearly and put the pizza on a plastic pizza dish - which of course started a fire in the oven. We called 911 and the firemen came. I also called Dr. K's after hours emergency phone number to ask if it was okay for me to stay in the house that night with the fumes of smoke and burnt plastic. Thankfully, he said that the embryos should not be harmed this early by the fumes. My MIL has a custom built oven in her wall which would have cost $1200 to replace! I was thankful because she knew a handyman who came over and cleaned out all of the burnt plastic and left the oven in almost the same condition prior to its fire. I would have felt so awful if I had cost my in-law's $1200!

I will now read all of your blogs and try to catch up with you guys! Keep praying for our babies and our hearts - we trust our good God!
Posted by Aaron and Jennifer at 6:05 PM

Love the cute pics Jen! Praying for you and thinking of you all the time.

Praying for you and your embies during this 2WW. Praying that you get your Christmas miracle!

Thank you so much for the update Jen! You are so beautiful!!!
Your week has definitely been full of adventure. The pizza incident sounds like something I would do! Please know that you all are in my prayers!!

Yay! Baby pictures : ) So sorry about the pizza fiasco. THa tis soooo something I would do. I kid you not! When is your Beta draw? Praying! ((HUGS))

Oh my, what an adventure! At least you have some good stories to tell! Praying for you and your babies.

What a week! I can't wait to hear what this 2ww brings you. Praying that these embabies make themselves at home!

So good to hear from you! Been praying for you a lot!! I look forward to hearing more!! =)

Such fun pictures! I love it! We're praying for you and the three little ones! Hurry up 2ww!

Wow, what a week! I was hoping you'd update! When is the beta?

Sorry to hear that it has been a little crazy, but so glad that your transfer went well! Praying for you and your babies during the 2ww!

You definitely had quite the transfer week! I am praying like crazy for you guys and your little ones. Hope they are burying in deep : )