Yesterday, Abel and Belle had their 6 month check-up and shots. They are finally on the growth chart/curve. Mind you, Belle is only in the 15th percentile for her birthage and Abel is even less (though he weighs more...boys and girls are charted differently). But, they are on the curve! And for their adjusted age, they are both over the 50th percentile! Belle weighed over 14 lbs and Abel weighed over 16 lbs. They are rolling over like crazy now and continuing to be such joys in our home. I don't have time to post much more, because I hear one of them waking up from their nap, just as I sit down to post. But, I will leave you with these adorable pictures from their cousin's 1st birthday party. They are eating a cupcake baked into an ice cream cone last month (yes, I let my not even 6 month old babies eat icing. Haha). Abel actually enjoyed it more than the picture showed, he was initially upset because I had woken him up from a nap to take pictures, but he came around to liking it. :) 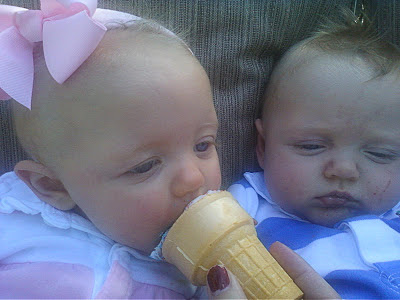 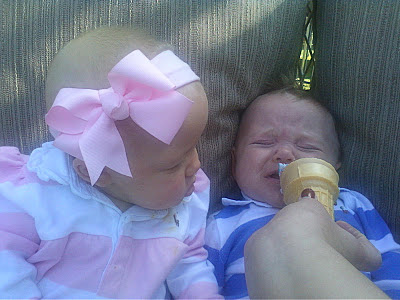 Posted by Aaron and Jennifer at 12:14 PM

They are just adorable!!!

They are beautiful! I know Christmas will be extra special this year. We are rejoicing with you!

Glad they're growing so well! Such cuties! Merry Christmas!!

my heart just swells! they definitely look like twins! love them! merry christmas!