Yesterday, Aaron was off of work and I always have Friday afternoons off, so we had a "Date Day" and did two really exciting things (three if you count Chick-Fil-A).

The first was that we voted early for the upcoming election. The lines were very long, but it was worth the wait. Now, Aaron can free up his staff from the store so that they can vote on November 4th. Plus, it's nice just to know that you've cast your ballot in case some emergency were to come up around election day which would prevent you from being able to vote (ie. you got sick and ended up in the hospital - Not likely but it could happen). 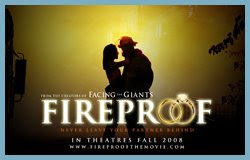 After voting, we went to see the new movie Fireproof starring Kirk Cameron. It was a wonderful movie. This was Aaron's second time seeing it, because he was able to see a pre-showing at a LifeWay manager's conference last month. He told me that it was the best movie he had ever seen and that I had to go see it with him again. I'm glad that I did because I would agree with Aaron. I am also very encouraged by Kirk Cameron's commitment to Jesus Christ. I had the privilege to hear him speak last year at one of his The Way of the Master events - He's the real deal. And, there is a kiss in the movie in which he is actually kissing his real-life wife, Chelsea. They did a silhouette scene so that you couldn't tell it wasn't the same girl. Kirk has an open commitment to only kiss his wife while filming- How awesome is that?! If you haven't seen Fireproof yet, I'd encourage you to do so - And do it before it's released on DVD. Show Hollywood and movie theaters that we want and will support clean, God-honoring movies!

Posted by Aaron and Jennifer at 2:00 PM