Warning - This will probably be the longest blog entry that I will ever type!

Aaron and I met almost exactly 5 years ago working at LifeWay. The first words we ever spoke to one another were when I asked him to help me find a cd for a customer and he pointed me in the right direction to find the cd (I hadn't even introduced myself to him at work yet...it was my first day at the Columbia LW and I had been told that his section was music and thought he could help me). Not a romantic thought went through my head - If I had realized that I had just laid eyes on my future husband, I probably would have found something sweeter or more sophisticated to say to him (maybe, I would have even been so polite as to say "Hi - I'm Jennifer" before asking him where the cd could be found)...

He apparently thought that I was really pretty the first time he saw me and over the next few weeks started liking me...I was both oblivious that he liked me and disinterested in him during those few weeks. He was even asking to work 12 hour shifts on Saturdays just so that we wouldn't miss each other working opposite shifts! Valentine's Day (which is also my birthday) was about 3 weeks after we had met and he wanted to buy me flowers but thought that would be a little too forward of himself and so he bought a single rose for every lady that worked in the store! He picked out the prettiest rose (I didn't know this at the time) and left it with a birthday card for me in the breakroom. Still, I had no clue and I don't like flowers (he now knows that he should just spend his money for me on something that doesn't die) so I put it in the cupholder of my car where it sat for a few days and then died (again if I had known this rose was from my future husband, I probably would have dried it and saved it in our memory box).

About a week or so after my birthday, he casually asked me at work if I would ever want to hang out. Not wanting to be rude, I said okay. Looking back, I'm not sure why I said "okay" because I didn't want to hang out with him and I usually would have politely said "no" as to not lead a guy on in the wrong direction. This time was different, however, as the providence of God was at work in my life. He asked for my phone number which I gave him but was secretly hoping that he wouldn't call...but 3 days later...he did call! And, since I had already agreed to hang out, I thought that I would hang out as friends 1 time and that would be it. We agreed to meet at Fazoli's on a Friday night and when Friday came, I was really nervous and dreading the whole ordeal but knew that I should follow through with my commitment. Ironically though, after my classes that day, I found myself in my college dorm changing clothes a dozen times. My roommate, Sarah, said, "But, this isn't a date?!" And I strongly replied "NO - it's not a date!" So strange that even though I didn't have any romantic feelings for him (or so I thought), I found myself wanting to look attractive to him. I had a back-up plan to speed the night along and leave as soon as possible - at a specific time, I had agreed to meet my roommate at the movie theater. Well, I immediately told him that I had to leave at a certain time to meet my roommate and he did the unthinkable....He invited himself to join us! I couldn't be rude, and so I again said "Okay." During dinner, we found out that we both had the same favorite band and were listening to the same cd in our cars.

After what I thought wasn't a great "love at first sight" kind of night, he got the nerve to ask me to hang out again - And again the quiet providence of God was at work because I don't know why I said "Okay" yet another time. The next time we did hang out,though, I was struck with how amazing this guy was and thought that the girl he would one day marry would be incredibly blessed...And wow - that girl is me! My assumptions were correct and I am indeed incredibly blessed to be Aaron's wife!

Happy Valentine's Day, Aaron! I'm so glad that you pursued my heart in the past and continue to pursue me each day! Your love for the Lord and leadership in our home make me so thankful that God chose me to be your wife! I love you!

This picture was taken at a cheap photo booth in the mall about a week or two after we started "hanging out." Such a great story with a very happy ending! :) 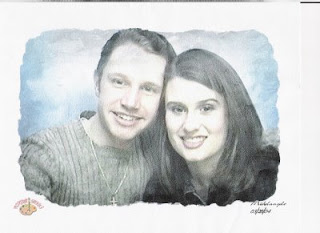 Posted by Aaron and Jennifer at 11:46 AM