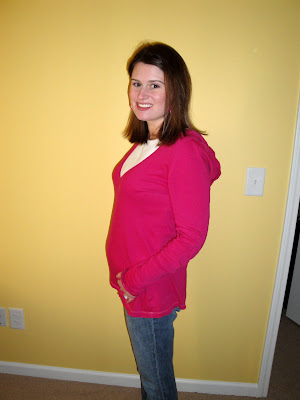 I had my first OB appointment last week at 11 weeks, but all the doctor did was an exam and take a lab test. Today, I had my 2nd OB appointment at 12 weeks and an ultrasound! Both babies appeared to be doing well and were moving around (Baby A was quite the wiggle worm...so much so that the tech had a difficult time getting his/her heart rate). Baby A gave us a nice side profile, but Baby B gave us a direct facing (the alien look-lol). Also, I've included my first belly pic at 12 weeks...still don't look very pregnant, but a little bigger. I'm definitely feeling my pants tighten, so I've begun using the rubber band trick, but I'm not big enough for maternity clothes yet. The NEDC nurse called on Tuesday and told me that I could stop all meds and shots, because their placentas had now taken over and were producing the proper hormones - Yay for no more shots 2x a day! I'm now officially out of the NEDC's care and solely in the care of my OB office. My next OB appointment isn't until February 17th and my next ultrasound won't be until I'm 20 weeks (the longest I've been without an ultrasound) where we will also hopefully find out their genders. My OB told me today to enjoy my month off until February 17th because that would be the longest they would go without seeing me being pregnant with twins. Once I hit 20 weeks, he says I will be coming in a lot more frequently than a singleton pregnancy.
Posted by Aaron and Jennifer at 1:46 PM

Congrats on getting off all the meds...what a milestone! Glad to hear your babies are happily swimming around. Prayers for continued healthy for all of you.

So glad things are progressing so well. Praise God!

You look great! I can't believe that you are 12 weeks already.

You look fantastic. I am glad the babies are doing well. They are super cute! Congratulations on graduating to the OB!

YAY!!! Congrats, love the pictures. Glad to hear that all is going well. Just a thought I have been using the be band (got it at Tarjay) with your pants/ jeans. I have two. It can be irritating at times but right after it is washed it is the best etc...
It is hard to go that long without an ultrasound, I know. I am soooo excited for mine on Feb 3rd. I haven't had one for a while.
Hope you all have a great weekend.

you are itty bitty! the babies look gorgeous. i cannot believe you are already 12 weeks!

You look so cute! And YAY for no more shots! I bet you won't miss those at all. Amazing ultrasound pics!

Wow! I'm totally having flashbacks looking at your photos (1) beign 12 weeks pregnant with multiples and (2) the embryo photo! I am seriously so super happy for you guys and can't wait to find out more news! BTW...my vote for gender is two girls!

You look wonderful!! I am so glad you are free from shots!! I hereby nominate you for the Pincushion Award based on your almost continous use of PIO shots since June AND the fact that many of those shots were given with 18 gauge needles! Those babies are worth the pain~I know!!! Have a great weekend!

Love the bump! Love the u/s pictures! Love the fact that you are no longer on meds! To me, the last one, finally allowed me to feel 'normal' :)

Can't wait to hear what you are having!

Prayers being sent your way....

You look great!! Yay for being off the meds!!

YAY! All such great news!

So glad everything is going well! You look great, BTW! YAY for no more meds!

You look so cute!!! Thanks for stopping by my blog and your words, sorry to hear your OB experience has been disappointing as well! I said the same thing to my RE's office, I wish we could stay with them the whole pregnancy:) Something I found to be really helpful during my first pregnancy at this stage when your pants start to fit tightly is something called a bella band you can find it at target. It works awesome & helps your regular pants to fit much more comfortably in this in between phase:) Continuing to send positive thoughts your way as you progress into the second trimester!!!

So very happy for you, Jennifer! You look great and love the belly! Can't wait to find out what you are having!

Yeah! Looking good lady! It makes me smile to see your updates. I found some old pics the other day of us carving pumpkins at that little house michelle and i shared...fun times :)

So glad to hear things are progressing well. It is hard to go from getting an ultrasound every week or two to going several weeks without one. The good thing for you is that, with twins, you will probably get more than most of us!

I also have a be.band. I am not a huge fan. I have difficulty with it riding up in the back and letting my unbuttoned pants ride down. But, at least the fabric covers the gaping hole in my pants. The black one seems to be less transparent than the white one, IMO.

Love the pics! So happy everyone is cook'n so well! God is good!