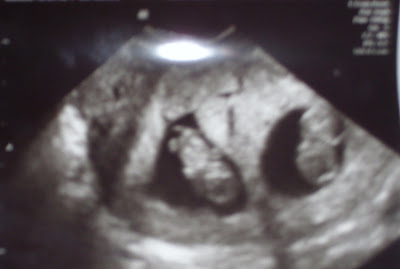 Above is the picture of our babies at 9 weeks 0 days (sorry that it is kind of blurry). By God's grace, both babies looked great and had heartbeats of 158 bpm & 174 bpm! I had always thought that ultrasounds would be exciting (and they are), but they also evoke a lot of fear each time. This pregnancy is such a struggle in learning to trust God. The NEDC is closed this week, so they won't call me with their take on it until next week - But, the local nurse said all looked wonderful and not to worry. They are starting to look more like babies now - In fact, Baby A on the left was kind enough to face us and give us a good look at his/her spinal cord and arm/leg buds. Both babies were moving around which was so cool to see!

Some of you have been asking how I've been feeling and what symptoms I have had... Overall, I feel normal! The strongest symptom was an increased hunger that began during the 2ww which has continued, though now I think my body is adjusting to the hCG and the increased hunger is beginning to taper off. I've had some slight nausea in the mornings and nights, but no vomiting and some days I'm exhausted. Also, I've had cramping since the 2ww and I always worry when that happens, but I've been told by the doctor and nurses that it can be normal for some women. I also think I've been so nervous about this pregnancy that sometimes it can cause my stomach to hurt...who knows? In general though, I don't "feel" pregnant most days and begin to wonder if I still am, but the nurse assured me at my ultrasound this morning that I am very pregnant. Thank You, Lord!
Posted by Aaron and Jennifer at 10:21 AM

LOOK at those little nuggets!! Hooray!

I was crampy the whole 1st trimester, it IS scary, along with every little twinge, twitch...I know it is impossible, but try not to worry too much :)

Praying for your (and the babies) continued good health!

Praise God for those beautiful babies with beautiful heartbeats! I wonder if you have one of each in there? I guess time will tell! :)

That is so,so amazing- your BABIES!!! I'm just in awe! Glad you're still feeling good- maybe you'll be one of the "lucky ones" that don't get sick. Is your belly growing yet?? =)

So happy for you! Look at those beautiful little miracles! I too didn't feel pregnant at first and would get scared before each u/s. I think it is part of IF that we just can't shake.So glad the babies are doing so well.((hugs))

So, so amazing! How often will you be getting ultrasounds? Don't forget to take belly pictures!

Praying for peace for you, friend!

So happy to see pictures of your cutie babies! Can't believe you are already 9 weeks!!! So exciting!

Our only child was conceived by IVF and I, too had a lot of fears. I want to let you know that I also had lots of cramping. Mine went from implantation cramping to general crampiness to braxton hicks. I was always crampy the whole time, they always said it was normal, and I went over my due date by 4 days. Try not to worry. Those babies look beautiful!

They look soooo beautiful! Seeing them brought a smile to my face.

So incredibly happy for you, Jennifer! I didn't "feel" pregnant for a long time either. You will start really feeling it when your belly continues to expand! : ) Keep trusting in the Lord. You are doing great!

What a beautiful picture! I am so happy things are going well. I am right there with you struggling with worry. Praying we both can let go and let God be in control.

Congrats! What a BEAUTIFUL picture of two precious little ones:) So happy for you. I am right there with you on the ultrasounds, I get nervous and then once I know all is well I am excited.
I didn't have much symptoms either, and I still don't, although my stomach is starting to pooch (tomorrow I will be 15 weeks)- which of course makes me nervous not having those symptoms. Thinking about you and glad all is well!

So precious!!! And as hard as it is, don't worry about the lack of symptoms. I had almost NO symptoms the entire pregnancy. My boobs never hurt, no heartburn or morning sickness, no nausea, no frequent peeing. Nothing! Scared me a lot at the time, but now I am thankful that I felt so great the while pregnancy.

Baby B is waving at you!! What precious photos : ) Are you guys going to find out the genders or wait? They are just gorgeous!!

I'm so excited to have found your blog! I've seen your link on friends' blog lists - and it caught my eye b/c I have friends named Aaron and Jenn Wilson - too funny!
Anyway, I especially enjoy reading blogs of people going through EA who share their heart for God and this special calling for our families! You're in my thoughts and prayers as your pregnancy continues! Congratulations on your twins!

HUGE smile on my face reading your post and looking at that ultrasound. SOOOO amazing. What a gift. My prediction -- you have a boy and a girl in there!

Congratulations on your twins! (I'm a friend of Tracey's and have followed your blog through her's; I think I commented to you once before but you don't know me!). I have twin 3-year-old boys from our 4th IVF and we're now in the process of donating our remaining embryos to NEDC. I am so happy for you about your twins - it's a crazy and wonderful life! One neat thing about twins pregnancy is you get extra ultrasounds! So, more times to endure the pre-US fears but also more times to get reassurance! Also, you may already know this but another bonus is that your regular doctor will probably tell you to expect delivery around 37 weeks, so right off the bat you get 3 weeks chopped off the 40-week calendar due date!! (Ours ended up coming 6 weeks early but that's another story). Anyway, you have so much to look forward to!

Praise GOD!! Look at those beautiful babies!! Congratulations on your little gifts from above.

I am keeping you in my prayers

So cool! I bet it's surreal sometimes! I was in disbelief a lot at the beginning of my pregnancy... though the ALL-DAY-nausia did help to remind me! ;) I'm happy for you that you're having very mild symptoms! I can't decide which was worse for me... 3 1/2 months of bed rest or my first trimester of nausia, exhaustion, migranes, breast pain, aversion to all touch... etc! You're quite blessed. =) Especially because they say it can be worse with twins than with a single baby pregnancy.

So cool! I bet it's surreal sometimes! I was in disbelief a lot at the beginning of my pregnancy... though the ALL-DAY-nausia did help to remind me! ;) I'm happy for you that you're having very mild symptoms! I can't decide which was worse for me... 3 1/2 months of bed rest or my first trimester of nausia, exhaustion, migranes, breast pain, aversion to all touch... etc! You're quite blessed. =) Especially because they say it can be worse with twins than with a single baby pregnancy.

Love the picture! I think my nine week was my favorite because you could really see them taking shape and Grant waved at us with is little arm bud. Too cute!

I had the same feelings/fears, especially early when I couldn't feel them moving around and I wasn't showing yet. I couldn't wait for each doctor visit or ultrasound so we could hear the heartbeats. It was always music to my ears.

We're continuing to pray for you and your little miracles.

So cool! :) Praising God with you!

I just wanted to tell you that I can 100% relate to this post! The fear the ultrasound brings, the increased hunger (especially in the morning for me), not feeling really "pregnant" just tired! I could have written all of this!

Thanks for the reassurance and continued blessings to you!